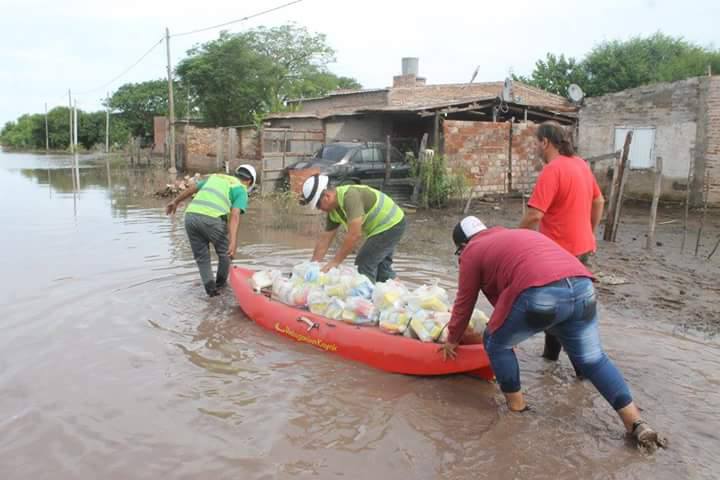 The water level has fallen and we have been able to help many more, especially the most vulnerable to the flooding. However many have lost everything in the flood or to burglary when they were forced to leave their homes. We have done much and shared compassion, so a big thank you to all who contributed!
You make a difference but more needed! Please give a gift to the restoration

The International RC Committee also wrote a report on this:

During the morning of the 20th of January, intense rain resulted in an accumulated rainfall of 290 mm in Presidencia Roque Sáenz Peña (Taking in consideration that the wettest month is January with an average of 100mm of rain), causing flooding that isolated zones across the city as well as cutting the electricity supply and causing the collapse of the sewerage system. Some homes and public buildings were flooded by between 10 cm and 150 cm of water. Presidencia Roque Sáenz Peña, which is part of the Chaco Province, is located 170 km from Resistencia (provincial capital) and 1,100 km from Buenos Aires. The affected neighborhoods are: Santa Mónica, Tiro Federal, Ginés Benítez, Monseñor de Carlo, Santa Elena, Hipólito Yrigoyen, Sáenz Peña, Milenium, San José, Piñeiro, Nala, Pablo VI and Quinta Ocho...At the time of writing the present report, 1,134 people were sheltered in three evacuation centers, of which two have problems with access to water that is fit for human consumption and difficulties with solid waste management in bathrooms. Due to this situation, some people are suffering from illnesses such as gastrointestinal pain and skin rashes. People who are sheltered in some of these centers do not have access to sanitary services, and there are some temporary difficulties in accessing food due to challenges in accessing the region.