Public education in Guatemala is supposed to be free, but in reality uniforms, books, enrollment fees and supplies mean that many children do not have the opportunity to attend even primary school. At Star of Hope one of our high priorites is education. For this purpose we have teamed with Tob'anik as a way to reach these marginalized children and give them hope for the future. 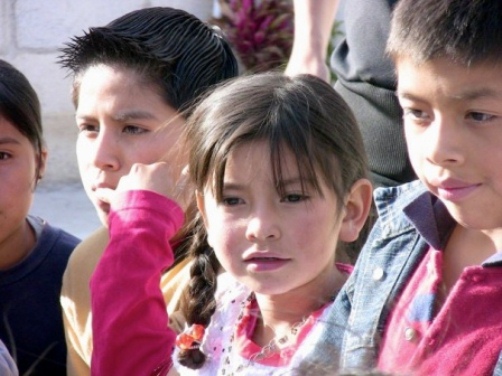 Convinced that education is the best method by which to improve the country and provide its children with a better future, the mission of Tob'anik is to help as many children as possible in and around the city of Quetzaltenango, Guatemala to attend public school. We hope to aid in the development of a sense of hope and self-worth among the youth by financing their education, providing them with basic resources, and encouraging them to become contributing members of society.

As of 2010, the World Bank estimated that 75% of Guatemalans fell below the national poverty line. The average annual income per family in Guatemala is 2,600 - 2,800 USD, though many do not earn this much. The average family in the city of Quetzaltenango has five children, making public school education, which averages $150 and $300 per year, unaffordable for many.

The school has been supporting the education of local children since it was founded in 1991. However, the economic recession has meant that today the number of children in the program has dropped significantly from several years ago. Families who were previously accepted to the program have been denied financial aid due to a lack of funds. In 2011, 40 children were sponsored with funds from Tob'anik Germany's donors and with a portion of the modest profits of Juan Sisay Spanish School.

You may learn more about Tob'anik USA at their website.

An Opportunity to Help a Child in Need

Tob'anik USA seeks to grow the project by expanding the donor base to the US and other countries around the world, allowing up to 80 children, who would otherwise not be able to attend school, to receive education and basic nutrition.

Please help us reach our goal of increasing the number of children we can help and of providing more support to the children already in the program.

When you make a donation, you are helping to provide:

-program reunion dinners, held four times a year, to provide motivation, support and solidarity for children and their families

Association Eterna Primavera in Guatemala is a new project for Star of Hope and we are so happy to be able to help the existing community continue with their good works making real changes in the whole community.

The association Eterna Primavera is a humanitarian organization promoting local community development through education and health care to families with very limited economic resources, in the area of San Felipe and San Martin. The association is run on voluntary basis without economic interest for the members. This community is off the beaten trail and has in the past received help from other organisations who have since left the location. It is a tragedy that this community who was on the way up once again was left behind. We want to concentrate on keeping the community in power and give them the tools they need to keep the children fed and educated so they can break the chain of poverty with education.

We have chosen two children to represent the project, one boy and one girl.

I will help develop this community right now.

What happens if I support this project? Where does my gift go?

The benefits offered to the families can be divided into the areas of education and health and are as follows:

When you support "Association Eterna Primavera in Guatemala" you contribute to many things at once, including:

• Monthly information/education talks for the parents

• Free access to Internet and computer for school related projects

• Social activities for the children, e.g. during talks with the parents

• Free continues health controls for the children by the project nurse

• Economic support with costs of prescribed medicine for all family members

• Rations of basic nutritive/healthy food for the families

The obligations for the families taking part of the project can be summarized as follows:

• All children at the age of school must be attending school

• Participation of the parents at the information/education talks

• The collaboration of the family in different activities

• Put in practice advice given by the project

I will help develop this community right now.