Star of Hope Haiti's team, Tony, Myrtha, Georges Hudicourt, and Antoine, have returned from the dangerous visit to our projects and the most damaged earthquake areas in the south. On this trip, they met pastor Reginald Celestin, who lives in the area and works with Star of Hope and our sister organization Tent Mission. 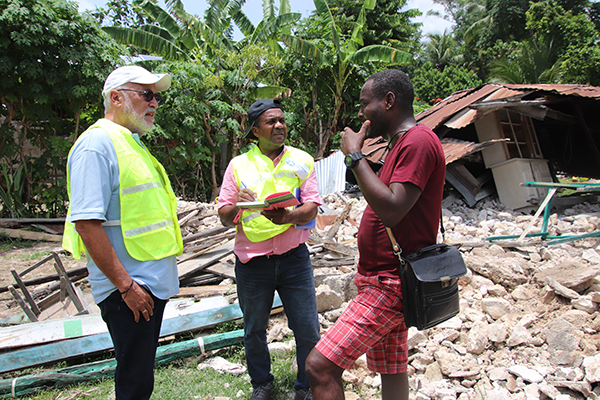 Tony Boursiquoit, the operations manager for Star of Hope Haiti, says, " I am preparing a report on the partial assessment of the damage observed in Cavaillon and a letter requesting assistance to rescue the victims in 5 local districts Cavaillon".

Tony says that will most likely include:
The short-term goals are to quickly supply emergency food kits to 700 families in two installments, September and November, and simultaneously back-to-school bags for 3,000 children.
The medium-term goals are to repair or reconstructed houses for around 300 families. 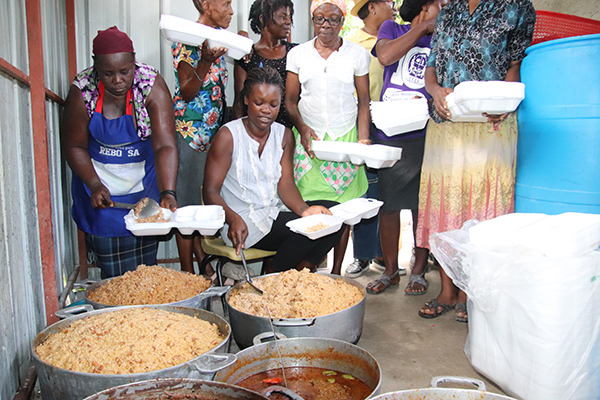 volunteers cook food for the homeless

The Cavaillon geographical area is similar to a county in the US. (see a map) They have about 60,000 inhabitants there. Cavaillon is one of the worst affected areas in the south.

Tony tells us, a report that the mayor of Cavaillon provided us on the damage in the whole local county included:
53 dead
21 missing
2,754 injured
18,168 houses destroyed
8,456 houses damaged
48 churches destroyed
43 schools destroyed

"We will focus our humanitarian assistance effort in Cavaillon, specifically in one of the five smaller districts called Martineau, there are 12,000 inhabitants in the micro area," says Tony

Myrta, the Director reminds all. "the more funding we have, the more people we can help. The operation is scalable. We would love to extend our intervention to other districts of Cavaillon with the same goals, food shelter, and school supplies."

This short update is just brief on the response Star of Hope Haiti is now planning and documenting.
Tony

HELP US PREPARE FOR THE FOOD INTERVENTION. It is easy to help, give a food box, give a gift online, give via Paypal, send a check. 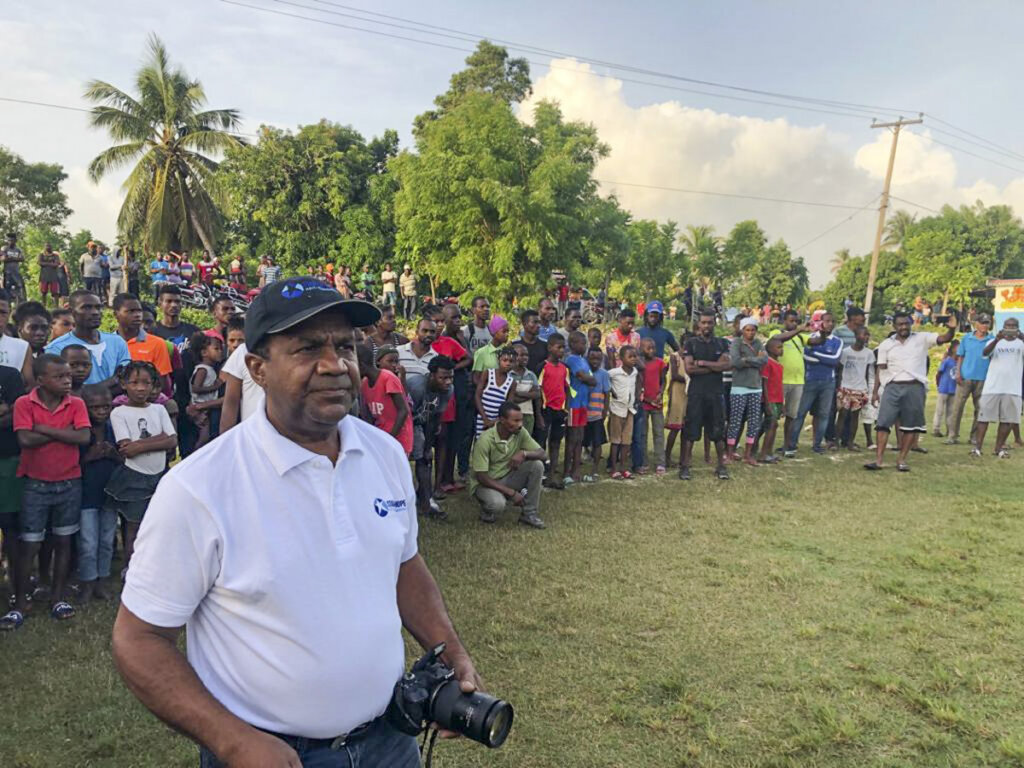 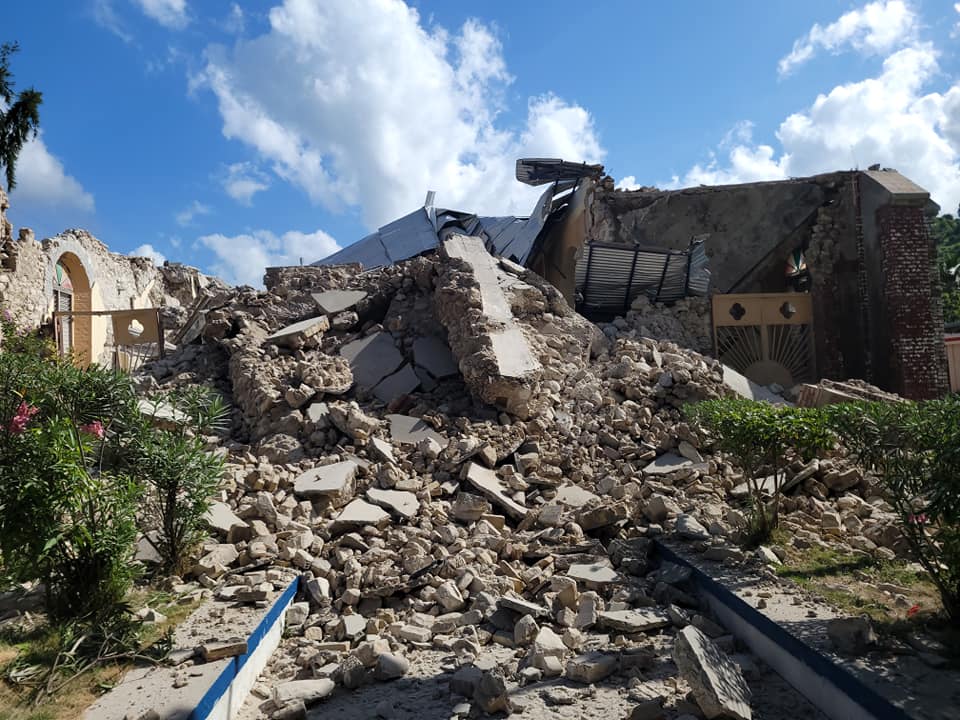 A TEXT UPDATE FROM TONY IN THE EARTHQUAKE ZONE... Aug 21
We are in Cavaillon in Pastor Reginald's village collecting information about the destruction of the earthquake.
It is one of the most affected places, we have decided that Star of Hope humanitarian efforts will take place here. 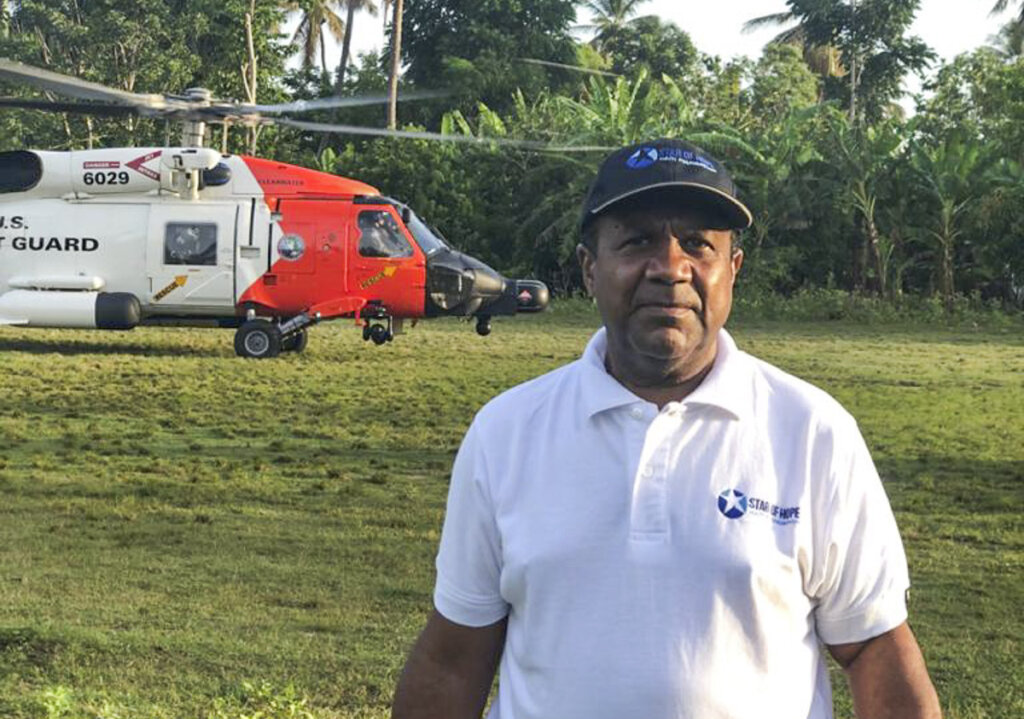 US helicopters are transporting injured people to hospitals in Port au Prince.
When we back to the office we will send reports, images, and videos. Internet service is not available all the time. That is why we can't have images sent yesterday and updates are not sending.
We were with Reginald yesterday and we will continue working with him and other local leaders to plan on the next SOH Humanitarian aid to victims in the south especially in Cavaillon.
photos, Tony, Myrta, board chairman, all in disaster epicenter.

Learn what has happened so far!
At least 2,000 have been confirmed dead after the earthquake in Haiti - but the U.S. The Geological Survey estimates that the actual death toll could be between 10,000 and 100,000.

Tropical Storm Grace (near hurricane) has hampered rescue efforts and worsened the crisis.
500,000 children are in urgent need of food, clean water, and a roof over their heads.
Now the highest officials of Star of Hope Haiti have managed to reach the worst affected area. 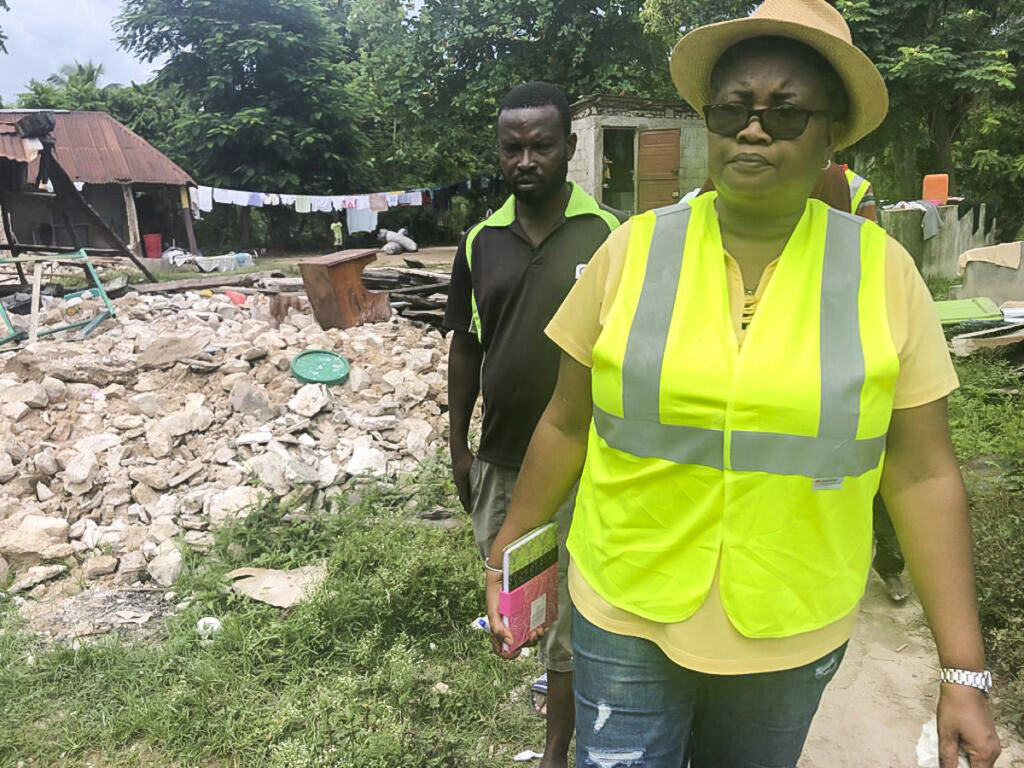 Latest News, Sunday 22 August:
Myrtha Dór, who is the Director and Tony Boursiquot, who is in charge of the field operations, are now on-site in the disaster area. An American helicopter flying away with the injured is one of the too few ongoing relief efforts they have witnessed since their arrival.

"Right now we are at Pastor Reginald's home", Tony greets us when he contacts us after a long silence due to networks and communication being down.
Reginald Celestin, who lives in Cavaillon, works every day mainly for the Star of Hope and Tent Mission and has on his own been responsible for a huge effort the last 7 days. With Reginald's house as its base, Star of Hope Haiti investigates the extent of the devastation and the most urgent needs.

"The Star of Hope's humanitarian efforts will focus on the places that are worst affected," says Tony.

This has happened
On Saturday 14 August at 08.29, local time, Haiti was hit by an earthquake with a magnitude of 7.2. The quake had its epicenter on land in the southwestern part of Haiti, just over 120 km from the capital Port-au-Prince.

Congested hospitals
The Haitian authorities cannot deal with the urgent need for help on their own.
"We need urgent help to take care of injured survivors and help those who are stuck under the landslides", says Tony Boursiquot. We also need ambulances that can transport the injured to our hospitals. The hospitals, in turn, are congested. There is a shortage of medicine and medical equipment.

Haiti's hospital staff are calling for tents where they can care for the injured. Hospitals are mostly built of heavy concrete, and both staff and their patients are afraid to stay indoors due to the risk of landslides.
"The need for orthopedic surgeons is urgent, says Tony. But they must also be equipped with surgical tools to be able to perform operations". 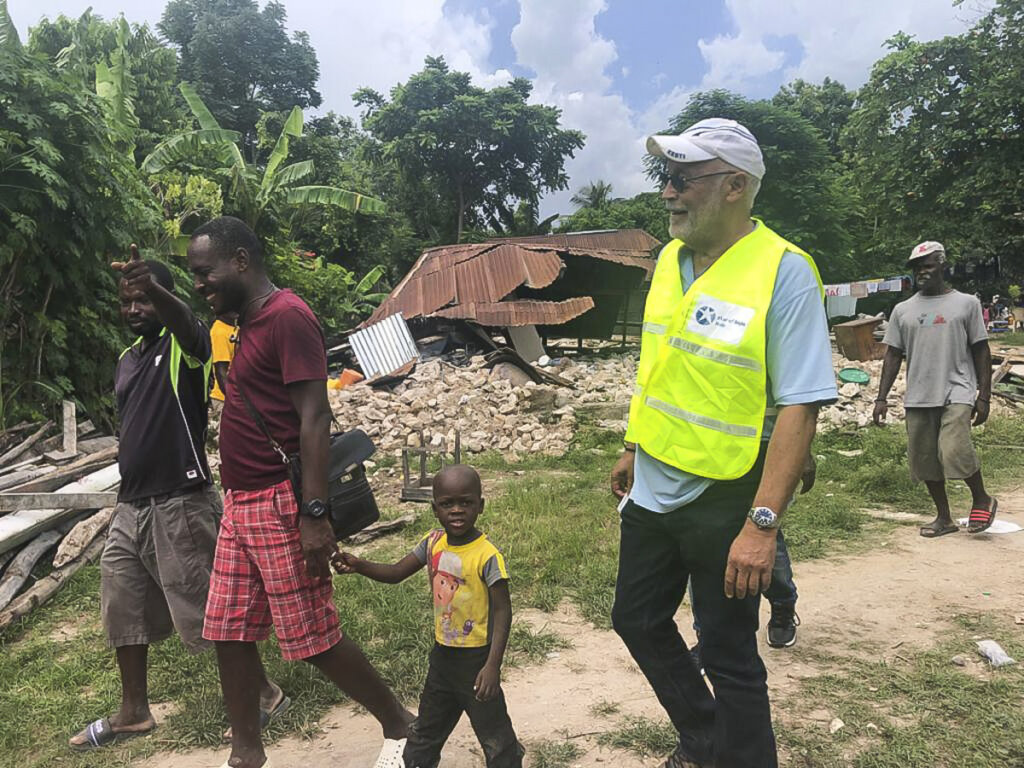 Good news from the Star of Hope schools
Tony and Myrtha have managed to get in touch with all the project managers in the Haitian villages where the Star of Hope runs schools. None of our project villages are located in the worst affected area, but buildings have collapsed around the country.
"Right now it looks like all our 3,600 school children have made it, says Star of Hope's COO Mark Presson. This, of course, makes us extremely relieved. In 2010, several of our schools collapsed, and when we rebuilt them, we made sure to make them earthquake-proof. Unfortunately, too few buildings in Haiti are built that way.

Armed groups block the road
It is currently very difficult to transport emergency aid from Port-au-Prince to the worst affected areas in the southwestern part of the country. Haitian President Jovenel Moïse was assassinated on July 7 and the domestic political situation was chaotic even before that. Three heavily armed criminal groups are fighting for control of the Martissant-Carrefour area outside the capital. Recently, they have blocked the only passable road to the west.
"The gangs have made holes in the house walls along the road and shoot with rifles through the holes. Those trying to pass have fallen victim to shelling, robbery, kidnapping, and even murder. "The police are powerless", says Tony Boursiquot.

Over the weekend, information circulated that the armed groups had agreed to a ceasefire, but this could not be confirmed. As long as the blockade lasts, the affected areas can only be reached by helicopter or boat.

Lack of food and water
One consequence of the roadblock in Carrefour is the non-delivery of goods. They, in turn, have left the people of the earthquake-stricken region empty-handed.
"They will quickly run out of food, says Tony. This is the latest in a long line of crises that have hit my country. The pandemic, the food shortages, the armed gangs, and the protracted political and economic crisis have all plunged Haiti into chaos." 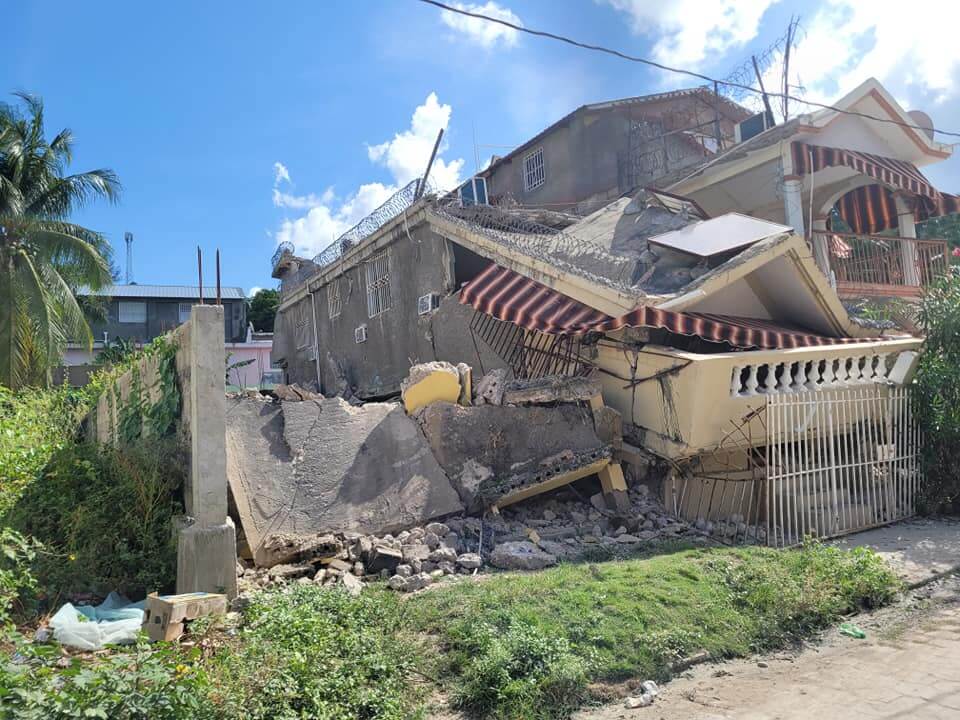 Tropical storm aggravates the situation
On Tuesday, August 17, just over two days after the quake, storm Grace swept across the country. It never reached hurricane strength but came at the worst possible time. The rain poured down on buildings without roofs and flooded the survivors' temporary tent camps. Now the risk of epidemics in the disaster zone is increasing.
"The people are in desperate need of water, food, and shelter, says Myrtha."

Our co-worker Reginald Celestin was in the worst-hit town of Les Cayes when the quake struck. When the storm rolled in, Star of Hope's contact was broken with him. The night before Thursday a conversation was reached again.
"How could we prepare for this rain in the middle of a disaster zone? People have no homes to seek refuge in" he said.

He managed to transport a 40-foot long freight container to a basketball court in the town of Les Cayes where many earthquake victims had gathered.

"They were outside and had nowhere to go," he said. "40 people slept inside the container that night. 50 more had to sleep on top of it while the storm raged. People do what they can to help each other", he says. "I try to get enough food to feed 350 people a day. Please, pray for us!"

The house fell on the baby - Haiti Earthquake

Help a family in Haiti Post Earthquake - You are needed