The earthquake baby was named Nice, she was born without a home.

We at Star of Hope want to give her a better start in life.

Following the 2010 earthquake, the American people made a fantastic effort in Haiti. Thanks to the money raised then, Star of Hope was able to rebuild 7 demolished or damaged schools and make several important investments for the people of Haiti.

“We will remember that always, '' says CEO Mark Presson. Thanks to your help, we were also able to make so many positive changes in Haiti. Many of our schools were reinforced then, perhaps that is why none were raised to the ground last week during the 7.2 earth quake. Thanks to you the schools are built to be earthquake-proof. We are extremely happy about that today.

Seconds from dying
Mark refers to what happened on 14 August. At 08:29 in the morning, Haiti was hit by an earthquake that was even stronger than the 2010 earthquake. At least 2,200 Haitians died and more than 12,000 were injured when tens of thousands of buildings collapsed. The worst devastation was in the southwest, near the epicenter of the quake. There, outside the town of Cavaillon, lives 20-year-old Michelove Heriveau. She had just stepped out of her home when everything started to shake. The house, which she and her husband Jean shared with two other families, collapsed before her eyes. When you see the ruins, it becomes clear that Michelove would not have survived if she had stayed indoors. 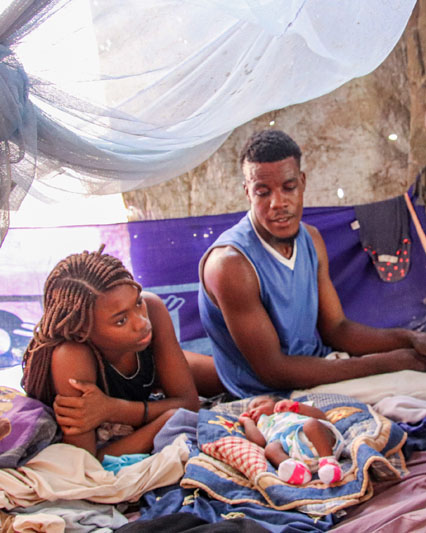 “The only thing I could think of was my child,” she says.
Michelove was nine months pregnant. All that she prepared for her daughter's birth was left under the landslides. “We had saved together for a used cot for her. And our relatives and friends had given us blankets, clothes, and much more… but everything is gone now.” 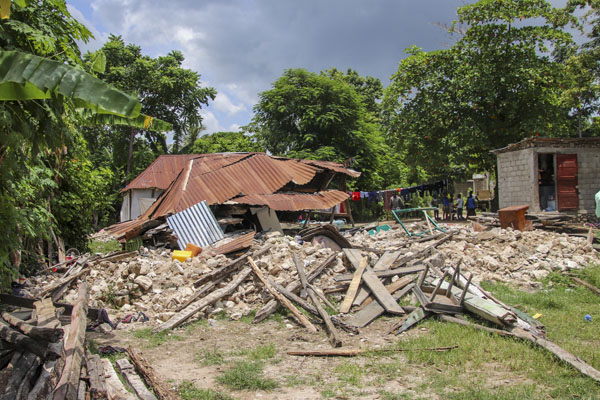 We took shelter under a sheet of tin roofing
Maybe something could have been saved after the earthquake, but then tropical storm Grace pulled in over the coast barely three days after the quake. The downpour drowned Haiti's house ruins and the wind tore apart the survivors' tent camps. Michelove and Jean took shelter in the ruins of a bakery. Part of the brick wall of the oven remained, and Jean used it to support the sheet metal from the collapsed roof.

A child is born
Three days later, after hard labor, Nice Safir Alexis was born. The sheet metal windbreak became her first home, and that was where the Star of Hope found her.
“Their situation was alarming. The plate was black with smoke and they were surrounded by landslides. That is not a place for an infant.” says Myrtha Dór, operations manager for Star of Hope Haiti.

"The people here have been abandoned"
Star of Hope is the only aid organization that has reached Michelove's village. The outside world has focused its efforts on cities like Les Cayes, 20 miles away, as in a lot of places in the USA, the rural population is too often overlooked.

“This place is located 10-15 minutes from the main road, and to a more remote area like this help rarely comes. The people here have been abandoned. “They need food, water, and a roof over their heads,” says the Star of Hope's Pastor and now field worker, Reginald Celestin.

Seven heroines
Already the week after the earthquake, Reginald took matters into his own hands. From day 1, he made sure to start serving food to those in need. To his aid he had seven heroines: Erlande, Kelie, Adeline, Rolande, Wileine, Italienne and Rose Clairedine.
“They are fantastic. The earthquake happened on Saturday morning, and five of them had their homes destroyed. Still, they stood here at 3 o'clock the same day, cooking. Now they spend the nights in the kitchen, so they can be ready right the next morning. It shows the strength of the people here,” says Reginald.

Still homeless
Michelove is one of 700 people in need who receive food from the Star of Hope every day. Without it, she would have no food at all, and no opportunity to breastfeed her little daughter.
Unfortunately, the family still lacks clothes, furniture, and a house to live in.
“I pray that we will get help to get out of this, '' says Michelove. My daughter needs a home.”

Join in and build a house for Nice and people like her and provide them food.
We want to give Nice Safir Alexis a new house to live in.
We also want to provide food, furniture, utensils, blankets, children's clothes, and toys.

Please consider a donation today. Make the decision to help the forgotten.

Or use this form: