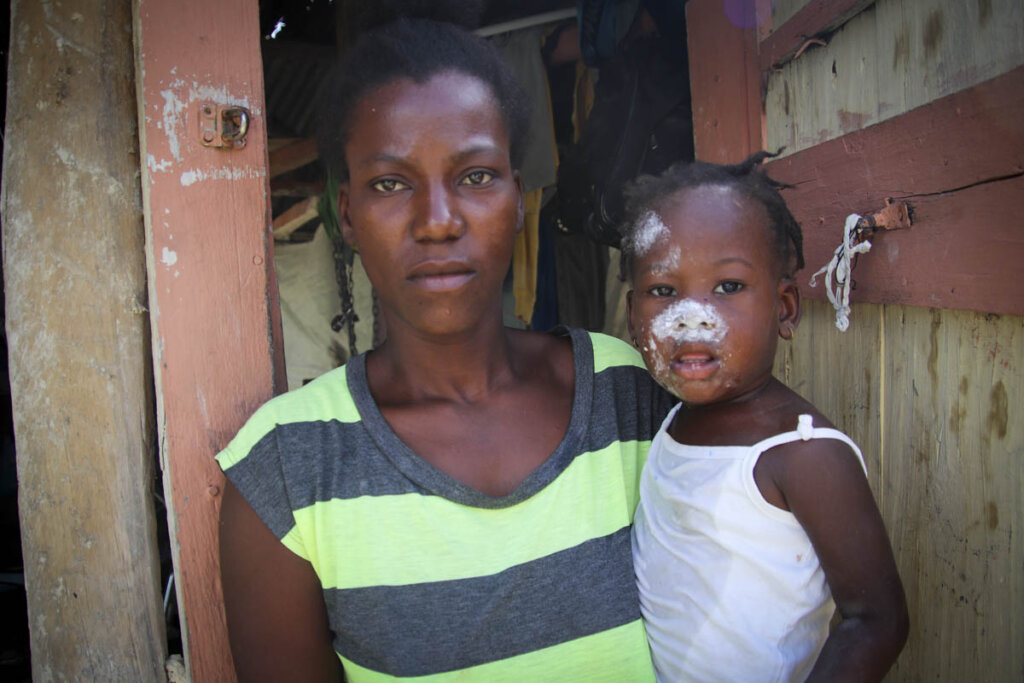 The house fell on Carlene’s baby
Two weeks after the earthquake in Haiti, hundreds of people are still missing, buried under the landslides. Now the outside world is being reached by more and more testimonies from the disaster zone. The mother of two, Carline, was standing outside brushing her teeth when everything started to shake.
“I stopped my son from rushing in and saving my daughter. The next moment, our house collapsed,” she says.

Official figures speak of at least 2,200 dead and 12,000 injured after the August 14 earthquake.
1.5 million people have lost their homes. In the Cavaillon district (South West Haiti) alone, the local mayor reports 18,168 totally destroyed houses. Star of Hope is on-site and serves food once a day to 800 people in need. The mother of two, Carline Cadet, is currently completely dependent on help from Sweden.

“I was pregnant when my husband left me,” she says. Feeding my children was difficult even before the earthquake. That morning I stepped out of the house to brush my teeth and asked myself how I could get food for the children.

The house collapsed
Her son Woodlain, 11, had just come out when the quake started. Eight-month-old baby Rose was still asleep on the floor.
“It shook so hard that I fell to the ground, says Carline. Then I saw that Woodlain was on his way into the house. ‘My sister, my sister!’ he screamed. Then I realized that I was about to lose both my children. So I stopped my son from rushing in and rescuing my daughter. The next moment, our house collapsed.”

Heard a cry
Carline screamed for help, but the other survivors were busy trying to dig out their own family members. Chaos and panic prevailed everywhere. Carline and Woodlain began to evict masses of rubble at a feverish pace. A sound penetrated the rubble and dust:
Rose was crying in there.
“There was a moment I could see my daughter's arms,” says Carline. We managed to pull her out safely. She had survived and was safe. I thank God!

Lives on the basketball court
Now she and her children sleep in the open air on the local basketball court. The worst was two days after the quake when tropical storm Grace pulled in. The wind tore apart the tent camps and the rain poured down over the ruins of the houses. That night, for lack of a better, the Star of Hope's Pastor Reginald Celestin managed to get hold of a 40’ shipping container in which those in need on the basketball court could seek shelter. Forty people slept inside it and 50 clung on top. Now they are building barracks for those who have lost their homes.
“We do what we can with the funds we have, says Mark Presson from Star of Hope USA. We have fantastic people on-site, and the only thing that limits us is that there is a lack of resources. Unfortunately, the Haitian catastrophe was overshadowed by the crisis in Afghanistan and the storms in the US. I really hope that the readers also see Haiti's need.

The people in rural Haiti need a hand up, our food kitchen is feeding 1000 a day and our interventions of family food kits and rebuilding will start soon, with your help we can do more.

Please give them a family meal box.