Will you Give? Thank you and God Bless you!

It's #GivingTuesday TOMORROW and we want you to come alongside the kids!
Give Now and be done with your good deed!

This year, on Tuesday, November 30th, 2021, Star of Hope is participating in #GivingTuesday, a global day dedicated to giving. Last year, thousands of organizations in 150 countries came together to celebrate GivingTuesday. Over one billion dollars was collected.

The goal is more important than most, to do emergency food relief in Haiti, people will receive hope, love, and food. How much is unknown as it is up to you, right now it is giving time.

What is it?
Oh, you want more information, ok the short story is "give" today to your favorite charity or cause. #GivingTuesday™ inspires personal philanthropy and encourages bigger, better and smarter charitable giving during the holiday season, showing that the world truly gives as good as it gets.

#GivingTuesday is a movement grown from a simple idea an idea where anyone, anywhere can join and be a participant in any way shape or form; donating money, volunteering time or raising awareness of a cause you can be a part.

This year Star of Hope needs your #givingtuesday gift to help restore dignity to Haitians due to continued social-economic violence. In simple terms folks who are starving, then need you and me to help with food. It is that simple.

Prices in Haiti continue to rise since last year and there is tremendous social-economic unrest. Food agricultural production is down and insecurity is up. Star of Hope staff reports limited travel possibilities in the country as roads are still blocked. Still today only half of our schools are running as semi-normal. Most of the ones that are running are far in the countryside. Star of Hope has a huge budget deficit with increased pricing and price gouging.

The world food program lately reported that 3.7 million people need help and that 1.7 million are in severe need of food assistance. That would be similar to the populating of Oklahoma being hungry while all in Montana were starving.

Star of Hope CEO Mark Presson says some of these reports from international governmental organizations use words like “food insecure populations”, that's great for international bureaucratic updates but I would like to express to the working man and woman that the term “food-insecure populations” mean people are worse than hungry, they are starving; perhaps not at risk of death but still starving. I wonder if the 8-year-olds who are starving in Haiti contemplate syntax over their hunger. What about you as an eight-year-old, hungry, starving...

I bet you would pray for relief, for food! Let's answer the prayer. Food insecurity is gone up at least 450% in the last 3 months in the rural areas and in the capital Port-au-Prince and the other larger cities food is worse than scarce. 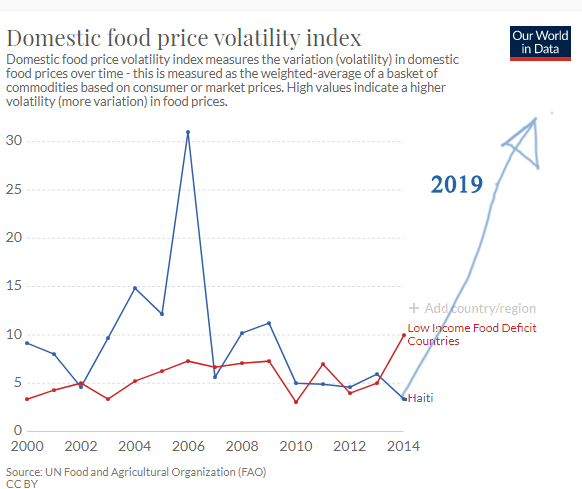 The figures are old but due to the situation they are the best we have, Haiti is too dangerous to get good information.
Security concerns, political unrest, roads being closed all add to increasing prices during an already inflationary period.

Our Manager in Haiti Tony Bursiquiot says “The least that can be said so far is that the situation has not changed yet and that majority Haitians continue to be afraid, armed gangs kidnappings all are abundant. The main roads leading to provincial towns are still blocked by trucks, trees and fired tires protected by sometimes armed gangs. Businesses and schools remained inactive, waiting for a positive outcome to the crisis, the things causing the severe food crisis.“

Food insecurity looms.
Our Director Myrtha Dor says simply” ...the kids are hungry and scared, it is the worse situation as the children suffer the most, we need food help more than ever.”

Star of Hope is responding first and foremost by assisting the people in and around our projects with emergency food boxes. In Haiti, the staff says a “food kit” can sustain one family of 4 for about 1 month.

Star of Hope is accepting donations here www.starofhope.us/give and also via a crowdfunding solution reached by texting the word foodkit to 71777.
This year let's help Haiti.

Thank you and Rich Blessings to you and your people!

Mark Presson CEO - so you know the kids say thanks too!

Give Now or by Check