When you give to Ukraine...

Yrigoyen, is a suburb of Sáenz Peña in the province Chaco. Star of Hope supports approximately 100 children living in this area. The vast majority of them belong to one of Argentina's native population, Toba, the predominant ethnic group in Chaco.

In Argentina Star of Hope works through the Good Shepherd Evangelical Foundation (Fundación Evangélica El Buen Pastor). This relationship has been in effect since 1972. 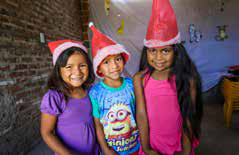 This is done primarily through educating children; believing this is the basis for all other development. While working with families, we inform them about their children's right to schooling and what education can mean, not only for the child but also for society as a whole. It is often difficult to get the children of Indians to attend school on a regular basis because many of them move around to find work. Many follow the cotton harvest or move periodically to live with relatives in the larger cities in search of work. Only about 5 % have steady jobs.

Close to Yrigoyen there are four State schools. A few of these schools have been renovated and expanded by Star of Hope. Two near-by pre-schools have also been built by Star of Hope. In Argentina, the school system has nine years of compulsory schooling. Even though the schooling is free, the Toba population does not automatically enroll their children. Many find it difficult to see the value of education and children are needed to help support the family. Star of Hope works with the families to address these attitudes and help them recognize the value of an education

Thanks to donor support the children get help to buy school supplies and the mandatory school uniform. Each month, the family also receives a package of basic products such as flour, cooking oil, tea, soaps, etc. The children also receive dental and health care at the clinic Star of Hope built in Nam Qom, another suburb close by. The children start preschool when they are 4-5 years old. The language in primary schools is Spanish, which creates problems since most of the Toba children do not speak Spanish. To help in this situation Star of Hope has trained several bilingual teachers and they are available at both schools and high school to support children from the Toba population. After one year at preschool, the children begin primary school. They leave school when they are between 14 and 18 years old, depending on one when they started. This is usually when they leave our sponsor program. However, there is a possibility for those children wishing to continue studying to continuing to high school and university.

The evangelization continues with the evangelists and Toba pastors who have been helped through the years. The Johansson family continues to work hard with dedication, love, and patience in some sectors where syncretism is well established within the Toba culture. Churches are growing through Bible studies, training applicant teachers and future leaders. The present leadership is constantly being strengthened. Churches are growing through continuous evangelistic campaigns where hundreds of people give their hearts to Jesus. They are healed, liberated, and restored! The evangelistic work is broad and extracts much to achieve overall success in the people to whom we minister. But it is priceless to see changed lives enjoying the freedom that Jesus gave on the cross! Also, as the sports activities are being carried out with the children and youth, spiritual support is being given to students and technical staff of the "Star" Soccer School.

The city of Saenz Peña and Yrigoyen

The population of Saenz Peña is just over 100,000; most of the Toba ethnic group living mainly in the outskirts of town in the poorer areas. They are lacking many public services. that is in the finer neighborhoods there are some smaller houses, constructed of brick but most live in simple mud huts (chozas), with tar treated cardboard as the roof. The province is one of the poorest in the country and it is also the province having the highest infant mortality.

Through our work, we want to give children and their parents the vision that there is a possibility to change the seemingly hopeless situations. In addition to assistance with schooling, the Toba people are affected by the fact that someone from the outside believes in them and treats them with value as human beings.

New play park for a newly opened school in Argentina

Meet Kenth Johansson who arrived in Chaco Argentina in 1972