Hesse is a small village located high in the mountains, about 3.5 hours' drive from the capital Port-au-Prince. The school is run by a village council with representatives from all parts of the village. Star of Hope has supported the school since 1998. There are about 360 children from kindergarten up to grade six attending the school. In Haiti, it is not uncommon for children to start school until they are ten or eleven years old, which means that the school's students are up to 19 years old. The children stay in our sponsorship program until they leave school.

A good start in life

The goal of the school is to provide children in Hesse and surrounding villages, new perspectives, and better opportunities. At school, children follow the curriculum for Haiti. They learn to rad and write, math, history, French, and religion. They also learn to think independently, learn about values and human rights. The school also gives children a place where they have time to play and rest. The school has committed and trained teachers and additional staff that take care of facilities, management and cooking.

Besides education, the school serves school lunch that will prevent the children from suffering from malnutrition, which is common in Haiti, especially in rural areas.

It is also offered basic health assessment, which prevents the exclusion of diseases that can be easy to cure. The children also learn to manage their personal hygiene, which in turn helps prevent disease and lead to better health for children. The school also gives parents a safe place to leave their children during the day while they are working and getting a much-needed income for themselves and their families. 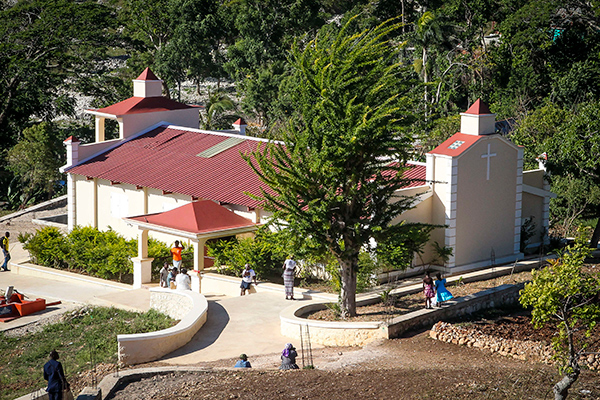 Hesse was very close to the epicenter and the whole area had severe injuries. The school building from 1983 was demolished in total as well as a large proportion of the dwellings in the village. Many children also lost their parents, as many of those were in Port-au-Prince working during the time of the earthquake.

Today there is hope despite the tragedy, a new, much better school have been built and was inaugurated in the fall of 2011. To have a functioning school in the middle of the village means that there is a future for the village.

The village of Hesse is located in Haiti in the underdeveloped countryside of Haiti. In the area lives around 10 000 inhabitants, most of them live in simple houses, built of dried mud with a tin roof. The people who live her survive, thanks to their small farms. They grow mainly maize, beans, milo (a legume) and yam. Many also raise chickens and goats, which is used for food and security when needed extra money, such as for medications.

The village has no electricity, running water and health clinics. In addition to Star of Hope School, there are two schools in the area, the two others offer neither food nor health assessment and charge high school fees as a proportion of the population cannot afford to pay.

Thanks to Star of Hope school, there is still a sense of optimism and hope for the future in the village. Children will get an education - and thus better prospects.

A dangerous job, get the food to the hungry in no man's land!

Christmas at Marigot - a fun video for you