How Myrtha Dor lived the Haiti earthquake of January 12, 2010

This is Myrtha's story in her own words.

"It has been 2 years since January 12 is not seen for me as any common day, but a day that had marked painfully my life for living the 45 seconds of the earthquake that had buried under 4 stories building my dearest friend-sister-in-law and her 2 sons.

I was in Haiti visiting my parents and was in the living room talking with my 83 years old mother while I felt my chair shaking for just a couple of seconds and looked at mom who was bouncing in her rocking chair. We just didn't have time to say anything when that "thing" in a sudden pulse turned our chairs. We stood up trying to grab something that we can stick with, it was impossible everything was moving away from us, we were bouncing back and forth and "that thing" even tried to lift the house at the same time while paintings from the walls, window glasses were flying in all directions. At this moment in an ordering voice I shouted "Mom, it's an earthquake seat down". She started to cry and for some reason I thought it was a tanker shooting in all directions, but Haiti wasn't in war, it's an earthquake! Then, we lose hope and started shouting and talking with God and our voices were blended to those living in the area. I remember my prayer and still tick to it "Oh God! Don't take me without your pardon, please listen!" 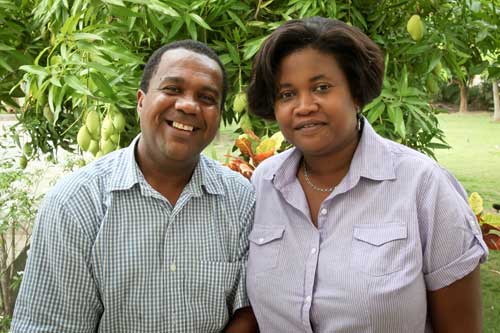 In a heavy dust covering the country, I heard people crying with their heart... oh! It was painful. No hospital to receive the injured and morgue for the dead. No radio or TV to tell us what to do, the phones were not working and no electricity. I grabbed a bed sheet and a pillow following other survivals and find me a place in the street to spend the night among of hundreds laid down. But, it was a deep dark night without sleep because I was thinking to other family members that I don't know how it went for them and listening to thousands of people who haven't stopped crying and hundreds of small groups doing their prayers.

The next morning people were in search of water either to drink, for cooking or to bath. My mother's house has a big reservoir; we opened the gate and let people coming to get water. Here is this man came for a gallon of water and starting to relate that he has been to his best friend house whose family owned a 4 stories house taking down to the ground by a university building while collapsing. Curiously someone asked him: "which family" and he replied "The Lochard's!" I touched my ears to feel if they were still there, if really I heard right. I walked in front of him and told him: "Shut up!" He kept on talking and saying more about the family, I told him again "shut up" and he continued talking like no one wants to listen to him and he will finish talking until he said everything... I closed my hands in a strong feast, pressed on my feet and shouted to him "you are talking about my family; my sister-in-law, SHUT UP!" I grabbed 2 cousins and found my way to that house. I couldn't believe to see by my own the picture this man was painting. I felt on my knees and started to cry and calling her name. Even in front of that devastating situation, I had hope under the rubber of 4 stories building she and her 2 sons can be alive.

The first mission team from SOH Sweden had contacted the rescue team sent by the Swedish government testing the area for survivals to check on my sister-in-law's house. They checked and said "no survival". Even in front of that devastating news, I had hope believing that the rescue team can be mistaken. I went 2 times a day on site; after my cup of coffee in the morning and before dark just to know if the persons who are digging find anyone alive. On day 4, I started to lose hope and on day 6 in the morning they had found her 1st son body, in the afternoon her body and on day 7 her 2nd son body. I know the meaning of "disappear". They disappeared on my sight and life, but they are always living in a special place they built in my heart.

I have told myself to accept the situation because in every home and family in Haiti there was a lost that this earthquake had caused. But it wasn't like so and so easy to forget until knowing how to live with it as part of your life. The first Psycho Recovery Team sent by SOH US came and started working with hundreds of children and adults. By translating for a young boy about the lost of his mom during the earthquake to the psychologist, I started crying together with the boy and telling him my lost. From that point I was no longer a translator, and found myself among those who came for therapy.

Two months ago I was cleaning my drawer and found my sister-in-law's picture. I talked to her through the picture and said loudly "you came into the world like a thunderstorm and disappear like so" and heard myself saying "oh no! It is still painful" and I cried all my tears...

Second year from January 12th earthquake is nearby. I still can't cope with the noise of big trucks and clacking doors. It still makes having the fear of that day hunting my life. If I had the Lord power, I would of take January 12 out of the year calendar for ever and all Haitians survivals would forget and be cured for ever from their pain and sorrow that that day had brought into their life. But the Lord plan is marked since creation. He wants me to face that reality and that he is really the Lord. He gave and took as his convenience. He wants me to appreciate life and especially what he had given me to please him in doing how he says.

I'm so happy that finally I can write today the pain and sorrow that I live with for 2 years. I feel cured!"

Myrtha Dor
Star of Hope Haiti Foundation
To see the incredible story in photographs visit our Haiti photo report page.
To learn more about the work in Haiti use this form.
To Give now, give now!